You Are Not Here, by Samantha Schutz 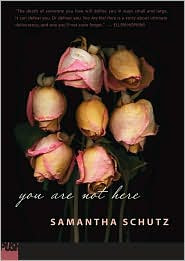 Told in verse, You Are Not Here is the story of Annaleah and Brian's short-lived romance, cut short when Brian suddenly dies. In the aftermath of Brian's death, Annaleah falls into self-pity and shuts herself off from her friends and family in grief. It doesn't help that her friends never liked Brian and that Brian never publicly acknowledged the relationship. Isolated, with her right to grieve unrecognized and unvalidated, Annaleah spends day after day at Brian's grave, trying to draw some sense of it all. Slowly, she manages to pull herself out of her depression, helped along by persistent friends and a chance for new love in the form of a guy at work.

Verse novels, I'm fond of noting, are very much hit or miss. I find them so risky that I usually avoid them altogether. This is one of the successes. It doesn't succeed so much on the strength of the poetry (some of which is good) or on the occasional poignant observation (far too easy when continuity is optional). It works in this case because of Schutz's keen sense of the human psyche. The grief that Annaleah is feeling is authentic and her feelings in general are real. Surprisingly, for a novel about grief, there are some really hot sex scenes in here as well (a particularly memorable shower scene sticks out). All of which is to say that Schutz sees a world that is full of many emotions, where a character can cry and laugh, grow angry and even lust -- all in one package. A fair share of sage advice about overcoming grief is a valuable side benefit.
Posted by Paul at 6:35 PM

Thanks for the shout out! Have you read my first book, I Don't Want to Be Crazy? Or seen my blog youmakemefeellessalone.blogspot.com?