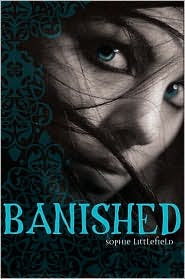 Hailey has always been at the bottom of the social hierarchy in Trashtown MO. But when a girl in her gym class suffers a serious injury, Hailey discovers that she has the ability to heal people. That's when things start to go terribly wrong. Strange men show up looking for her. Her grandmother starts acting suspicious. And when Hailey's long-lost aunt shows up out of the blue, all heck breaks loose. Soon, Hailey and her aunt are on the run from a greedy scientist, hired goons, a sociopath neighbor, and zombies!

I liked the way the book began (with a struggling teen trying to fit in amidst some pretty dark settings), but by the time we got to the marauding zombies I had pretty much lost interest. The ending gets pretty busy and ends on a cliffhanger (which suggests a sequel, of course, but doesn't really seem justified), which left me with too many unsatisfying loose ends. Hailey begins as an interesting heroine, but once the violence level kicks up (there's an amazing amount of non-fatal gunshots here), she becomes rather drab.
Posted by Paul at 10:35 AM