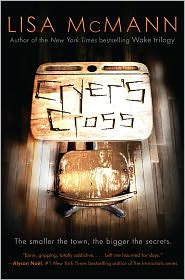 It's a huge shock for the small town of Cryer's Cross when freshman Tiffany Quinn goes missing. Nearly the entire town turns out to help with the search, but she is never found. When Kendall's best friend (and possible boyfriend) Nico also disappears, the shock hits closer to home. She is devastated. And while the town's suspicions fall on brooding newcomer Jacian, Kendall develops an alternative explanation when she starts hearing voices and seeing signs that no one else notices. Is she going mad or does she have access to clues through her OCD that could lead her to Tiffany and Nico?

Chilling and creepy, this is a story that will give you goosebumps while you read it and nightmares afterwards. It combines McMann's signature obsession with voices from beyond (see the Wake series) and gives it a moderately more plausible situation in the form of OCD-suffering Kendall. The result worked for me and is not nearly as silly as it might sound.

Kendall is also a much more interesting character for me than Wake's Janie (who went from tortured soul to whining super-detective a bit too quickly for my tastes). Kendall's OCD is easier to grasp and her rather human hesitations and weaknesses seemed more real. The potential romance with Jacian is predictable but handled nicely and doesn't interfere with what is otherwise a nice creepy ghost story.
Posted by Paul at 5:36 PM