The Exile of Gigi Lane, by Adrienne Maria Vrettos 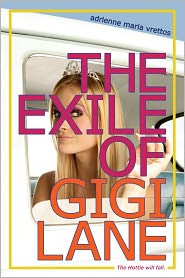 Gigi Lane is an A-list girl, and an over-the-top caricature of the popular girl, or in her words, a "head hottie." In her junior year, she has her sights set on one thing, being inducted into the position officially, as leader of the "Hot Spot" (the very highest clique in her school -- Swan's Lake Country Day). And the cliques at Swan's Lake are carefully and explicitly regimented: the "Mr. T's" (drama), "Vox Foxes" (school paper), Cheerleaders, "Whompers" (LARPers), and so on. In this world, it really would seem that Gigi's self-affirmation ("I'm Gigi Lane and you wish you were me") was true. She's the top dog and destined for greatness.

But then, a major scandal at the year-end Founder's Ball endangers Gigi's ambitions. She is disgraced and sent to Alaska for the summer to clean fish. When she returns, she has lost all of her status and has to rebuild her disgraced brand from scratch. While readers will expect her to eventually succeed in her rehabilitation (and maybe to develop a conscience and a soul along the way), the ending is so completely unexpected and bizarre that readers have an exciting surprise to look forward to. Suffice it to say, that the mean-girl genre never was skewered so brilliantly before!

If you read the book straight, Gigi's utter meanness will be very unappealing. And the exaggerated portrayal of high school cliques will bother most readers as unrealistic. But both criticisms miss the point in this social satire. The usual cliches are all present, but sent up in such a ridiculous fashion that they cannot be taken seriously. The result is a contemporary novel in the grand tradition of Oscar Wilde or George Bernard Shaw, but without all that pesky literary mustiness. Enjoy the laugh!
Posted by Paul at 12:10 PM