The Girl Who Became a Beatle, by Greg Taylor 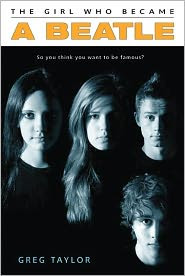 With perhaps the coolest book cover of 2011 so far, this is a playful fantasy on the dangers of wish fulfillment. In this case, Regina is obsessed with The Beatles and her tribute band (The Caverns) is her means of relating to the world. This all starts to look unhealthy when her band breaks up and Regina loses it. As she hits bottom, she makes a desperate plea for fame (keep the band together and make them famous). When she wakes up the next morning, her wish has been granted. She has become as famous as The Beatles or, more to the point, she has replaced them -- taking credit for both Lennon and McCartney and all of their compositions. Naturally, the question that arises is whether fame is everything it is cracked up to be.

It's a clever idea with a satisfying ending that moves beyond the fantasy to say some original things about wishes and self-empowerment. This, in spite of the fact that the ending won't surprise anyone (and isn't meant to). And the story, which is very much at risk of becoming ridiculous, saves itself quite handily by not being entirely predictable. After all, the idea that The Beatles (or a band like them) could exist - even in an alternate universe - in the contemporary day is ludicrous. The music of The Beatles was very much a product of its time and was essential for what followed. So, the idea that Dr Dre, the Edge, and Madonna could be hearing "Yesterday" for the first time in 2011 is implausible (since they probably wouldn't exist without The Beatles paving the way). But taken less literally (and the novel offers its own explanations), the concept works well as a medium for an allegory.

A minor criticism would be the need for better editing. Taylor packs in a lot of subplots (reconciling Mom and Dad, Regina's relationship with her mother, fighting for her bandmate Lorna) that simply get lost in the story and which would probably have been best left out altogether.
Posted by Paul at 8:57 PM