Never Been Kissed, by Melody Carlson 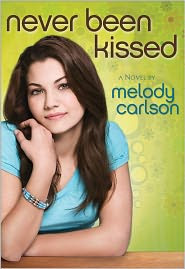 Elise is almost sixteen years old and she's never been kissed. While she impresses a younger girl in her apartment complex with her (exaggerated) worldliness, Elise knows that she's a fake. But when she meets a cute boy named Asher, she wonders if he could be the one. He's friendly enough and is sending her flirtatious emails. The problem is that he's taken.

From there, the story could have predictably become a sweet romance about boy and girl trying to find each other and Elise (maybe) finally getting her kiss. But that's not what Carlson has in mind. Instead, the subject of being unkissed gets sidelined by serious criminal accusations lodged against Elise. She must do everything she can to protect her reputation. Thankfully, she has faith in God to pull her through.

I am always on the lookout for YA books that address honest explorations of faith, but this sort of "inspirational" literature makes my skin crawl. Harping on about how "being a Christian" making you better than Lutherans (or anyone else) and proving your faith by attending services and judging others who do not isn't faith -- it's prejudice and arrogance. So, I tried my best to ignore the gratuitous references to faith here and didn't bother taking them seriously.

Oddly enough, the book actually worked as a decent whodunit. Yes, I think I might have preferred a more innocent book about kissing, but I enjoyed what the book was really about (integrity and making good decisions). There were a few plot points that seemed blazingly obvious, but the story unfolds nicely and I kept eagerly turning the pages.

This isn't a book for those with an interest in strong character development. The characters are flat and some of them (like the adults in authority) are grossly exaggerated, but Elise herself is appealing and multi-faceted. In many ways, this helps to keep the focus firmly on Elise and keeps the pace brisk.
Posted by Paul at 10:47 AM