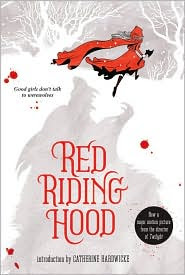 For years, the village has been victimized by a werewolf, but the town has had an implicit deal: regular sacrifices are left and the monster leaves the villagers alone. But something has changed and the werewolf has begun to attack the villagers brazenly. Valerie, unbeknownst to her neighbors, has always felt a link with the creature, just as she has also been drawn to outcast bad boy Peter. Her parents would have her marry rich boy Henry, but her heart belongs to Peter. And Peter may be far more than he initially appears. With peace and order disturbed, an inquisitor and professional werewolf slayer arrives to rescue the town, but his efforts unleash blood and mayhem across the village.

I haven't seen the movie, but my sense is that it must be fairly violent based upon the body count and the graphic descriptions in the book (the sex is pretty graphic too, but I'm more bothered by the violence). The characters seem pretty shallow here, which is striking since a novelization should have afforded the opportunity to expand where a film could not. And the plot is nonsensical (or missing the details from the screenplay that explained the flow). In sum, I wasn't terribly impressed. The exercise seemed largely derivative, even though the idea (riffing of the Brothers Grimm) was promising.
Posted by Paul at 6:10 PM