The Fortune of Carmen Navarro, by Jen Bryant 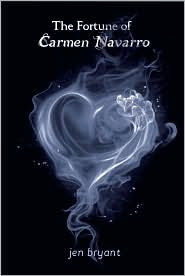 A shy military cadet meets a sexy and enticing gypsy girl who works at the local convenience store and dreams of becoming a popular singer. They have a passionate affair but the girl loves her music most of all and eventually finds the boy's attentions too constricting. The boy doesn't handle the rejection well, becomes obsessed, and chases after the girl, with tragic results. If the story sounds a bit familiar already, this last detail will clinch it: the girl's name is Carmen.

Loosely based on the story that inspired Bizet's famous opera, Bryant has not just modernized the tale (placing it in contemporary Valley Forge), but added more nuances to the title character. More than a seductress, this Carmen is a young woman with vision and will. She know who she wants to be and will fight whatever demons she has to in order to fulfill her dreams. It is Ryan (this version's Don Jose) who is the relatively less substantial character. Both Ryan's best friend Will and Carmen's best friend Maggie play substantial roles as well.

It's a good adaptation that just may draw a few readers to the opera, by showing that a great story is a great story. I don't see it is earth shattering (and it is obviously not original), but it performs the valuable purpose of decent modernizations: taking a classic story and making it accessible to a newer audience.
Posted by Paul at 1:49 PM