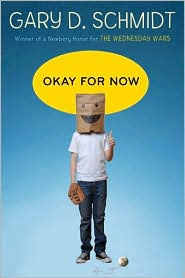 When Doug's father loses his job, he drags the family to Upstate New York, settles them in "the Dump" (as Doug calls it), and Doug and his brother are forced to eke by in "stupid" Marysville. Doug hates the town, he hates snooty Lil Spicer, he hates the teachers (and they hate him), and he hates his angry abusive Dad.

But things start to change when Doug discovers a copy of Audobon's classic drawings of birds in the town library. With some patient prodding from a librarian, Doug discovers his own talent for drawing. And when Doug learns that the town is cannibalizing the book (selling individual pages out of the book) to pay its bills, he sets out to "make things whole." This mission, along with working things out with his brother and father (and an older brother returning from Vietnam), present a series of challenges which Doug manages (sometimes implausibly) to resolve through a mixture of luck and mature insight.

Schmidt is a great writer and has given Doug a very distinctive voice which makes Doug seem very uneducated despite his insightfulness. It's a stereotypical New Yowrk voice (think Neil Simon's Brighton Beach Memoirs as an example) and a bit less original that Schmidt's other heroes, but he still draws you in. Besides Doug, there are a lot of characters here and Schmidt manages to make each of them distinct. The narration, meanwhile, is well-done and spare (for a children's book, surprisingly little is spelled out, leaving the reader to often do the work of inferring what has happened). Schmidt also works in a number of subtle historical details (the story is set in 1968-69) that will intrigue readers and inspire further study. Schmidt does seem to feel the pressure to give the book a too-good-to-be-true ending, but is brave enough to leave a few crucial plot threads unresolved to give the reader a dose of reality.

All that said, there is an odd tension in the book that causes me to withhold giving it the high marks that others have offered. While Schmidt paints a pretty dreary view of Doug's life (poverty, illiteracy, and abuse), he seems scared to really run with the ramifications of this darkness. And so, in almost the counterpoint to his oft-quoted phrase "when things start to go pretty good, something usually happens to turn everything bad," every time something bad happens to Doug, a miraculous solution presents itself and Doug (often in implausibly mature fashion) digs himself out. How else to describe ridiculous subplots like getting cast in a Broadway play and having baseball idol Joe Pepitone asking for his autograph? I get the idea that Schmidt wants to show how even a young person can think their way out of trouble, but given the dark nature of the book, I little more honesty seemed called for.
Posted by Paul at 9:35 AM