Other Words For Love, by Lorraine Zago Rosenthal 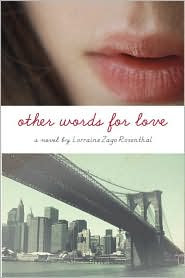 When Ari starts at Hollister, her best friend Summer (who already goes there) isn't around to guide her, but she quickly befriends another girl, Leigh. Leigh comes from a wealthy family in Manhattan and, in turn, introduces Ari to an entirely different lifestyle of fancy penthouses, parties in the Empire State, and hired cars. Leigh also introduces Ari to her cousins Del and Blake. Ari is immediately infatuated with bad boy Del, but Leigh warns her off. Instead, it is Blake that gets Ari under his spell. Despite her mother's warnings, Ari is swept away. Soon, her grades, her friendships, and her family life begin to suffer from her infatuation. When it ends abruptly, Ari is devastated and has to rebuild her life.


Set in the 1980s, there are obviously autobiographical elements present in the novel. This helps fill out details (and the book is chock full of amazing details). But, as usual, my worry is whether Rosenthal actually has a real work of fiction within her -- it's one thing to tell the story of your life, but can you write as well when it doesn't all come from within? We'll only know when/if she brings out her second novel. One thing is for certain, she has cut no corners in depicting her characters in depth, with the sympathy that can only come from living for each and every one of them and having decades to separate herself from the inspiring events. The book is dark and depressing, but captivating and addictive. What we get here reminded me an awful lot of the film "An Education" (a decent film set about 25 years earlier in London) -- same idealistic girl going places and getting sidetracked by love.


The details can grow burdensome. Somewhere after 200 pages, Rosenthal seemed to realize that the pace needed to be picked up. As a result, the ending is more than a bit rushed. Some of this is also because the story (so interesting when it was in the romance-phase) just doesn't hold much once we're in the recovery phase. Hardly anything is said about the healing process, which is a shame since it probably would have been the best part.
Posted by Paul at 7:00 PM