Smile for the Camera, by Kelle James 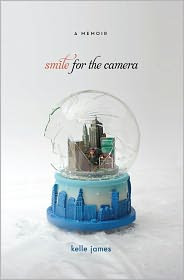 At the age of sixteen, Kelle decides to leave her abusive father and go to New York City to pursue her dream of becoming a professional model. Innocent and naive, she has a fair share of problems getting started, ranging from financial insecurity and unsafe living arrangements to dealing with sexual predators. But with the right friends she learns how to navigate the dangers of the modeling industry and eventually succeeds on her own terms.

As this is an autobiography, there isn't much of a point in criticizing the story itself. The bigger question is whether it is worth reading? There's no denying that the subject matter (small-town girl struggles to make it big in the big city) has inherent appeal and any girl who has dreamed of becoming a model will find the lessons taught here to be valuable. But, as told here, the path from rags to riches, is not terribly compelling. There is certainly plenty of difficulties in the beginning, but actually finding work doesn't seem to take Kelle very long and there never seems to be much risk of failure.

The story is also cluttered with a tangential subplot about a friend who is accused of murder. And this causes other subplots about things that would normally be considered important in a story like this (her strained relationship with her family, for example) to be underdeveloped and sidelined. Flashbacks to Kelle's childhood are also surprisingly unrevealing. The writing itself is technically strong, so there is no denying Ms. James's talents, but the narrative is rough and poorly executed.
Posted by Paul at 4:16 PM