So Shelly, by Ty Roth 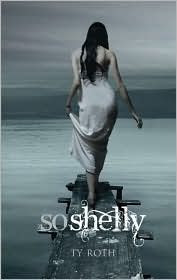 Imagine if the bad boys (and girl) of early 19th century English Lit (Keats, the Shelleys, and Byron) were alive today, and if (instead of being iconoclastic, gifted, and idealistic young writers) they were gifted and narcissistic contemporary adolescents. This is what Roth invites us to do in his novel, which is part ode to the ideals of the Romantics and part mash-up of early-modern and contemporary culture and values.

Ostensibly, the story is about Gordon Byron and John Keats's plot to steal the cremains of their mutual friend Shelly from her funeral and to scatter them on an island in Lake Erie. But the exercise becomes an excuse for Keats (the overall narrator) to reminisce about where the three of them have been and to hash through their ideas and ideals. As one would expect, Byron plays a larger than life role in all of this and Keats mostly exists to humbly record Byron's extravagance and Shelly's neuroticism.

It's a fascinating concept and often works in its ability to find clever parallels between the often self-centered life of these literary titans and the insular world of a contemporary teen. The idealism of the trio in this novel sounds authentically adolescent, while simultaneously mirroring the models. But there are problems with the parallel as well, not least of which are the age discrepancies. The commitment and agency of the originals doesn't translate well to the cloistered life of 21st century young people. More to the point, it's hard to accept that these young people could be as artistically successful (or educated) as their role models were. This makes the idea of Gordon's early literary prowess implausible (could a contemporary teen write Manfred?).

As for Roth's writing, it is inconsistent. The first eighty pages or so are witty and smart, but Roth starts to lose steam after that. His overall weakness is dialogue and as the characters grow chattier and engage in philosophical observations about life, the narrative grows dull. The words are mostly out of the 19th century and out of synch with the characters.

Still, as someone who is himself rather obsessed with the Romantics (and the Shelleys in particular), I can definitely see the appeal in the idea. Laying out the youthful optimism of the period and pointing out its relevance even 200 years later is a valuable insight. As imperfectly as it may have been implemented, it is a wonderful concept.
Posted by Paul at 7:54 PM