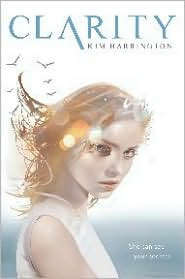 How can I NOT read a book with this title?

Clarity (or "Clare," as she prefers to be called) has the psychic ability to see the past by touching objects. In her family, that's pretty normal: her mother reads minds (which can be a very annoying trait in a mom!) and her brother can speak with the dead.

In her small town on Cape Cod, Clare is considered a freak and an outcast. But all that has the potential to change when a young woman is murdered and Clare is recruited by the police to help solve the crime. Along with the good-looking detective's son and some help from the mayor's son, Clare is on the path of the killer. But it seems like the killer is on to her as well!

OK, you need totally to put on hold any sense of disbelief that a town would turn a murder investigation over to a group of teens (imo, a plot twist which is far more implausible than that one of them would be psychic!). It's a silly premise, but the story itself is a reasonably interesting whodunit and a classic love triangle. Surprisingly, the psychic angle is fairly played down (thus, Harrington avoids the totally boring nature of the Wake trilogy) -- it's there, but not very important for the plot. Instead, Clare is interesting and boys are suitably smoldering. The result is a light summer beach read that we can enjoy for the unpretentious fun that it is supposed to be!
Posted by Paul at 12:37 PM