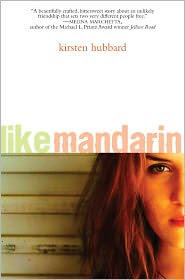 Out in Washokey, Wyoming, everyone knows everyone else's business and life is as dull as it is usually portrayed in any stereotypical YA novel about rural America. Grace Carpenter is a loner, an A-grade student, promoted ahead of her peers and poised for greatness. Aside from her invisible social standing, Grace is a success, but not in the eyes of her mother. Mom hasn't really respected any of Grace's accomplishments since Grace purposely threw the Little Miss Washokey beauty pageant at age seven. Now it is Grace's little sister who bears Mom's hope and attentions.

All of this is OK with Grace. She's at peace with her lack of social standing and with the maternal neglect. To compensate, she has a budding love for geology (with a decent rock collection to boot) and her own ambitions, one of which is to become a bit more like local bad girl Mandarin Ramey. Since Mandarin arrived in town (coincidentally during that ill-fated beauty contest), Grace has idolized her silently from afar. In Grace's eyes, Mandarin is sure of herself, unafraid of the judgement of others, and utterly fearless -- all traits that Grace knows she lacks. If only she could be a little like Mandarin.

So, when Grace gets asked by her guidance counselor one day if she would be willing to tutor Mandarin, Grace is both exhilarated and terrified. At least, she will get a chance to know this local mystery and get to the bottom of all of the rumors about Mandarin. But as the two girls get to know each other, Grace finds that Mandarin isn't quite what she expected. And she grows to realize that becoming like Mandarin isn't what she should be aspiring to at all -- she should be aspiring to be more like herself.

This is a truly stunning novel, even if it is familiar territory. Certainly the mystery girl and the wallflower who idolize her has been done before. Hubbard's take on Wyoming will break no threshold for originality either. But the writing is simply breathtaking. Pick any page in this book and read a few lines -- the quality of the prose will blow you away. Characters "dance away into the throng" of the other kids at school; the men in town have "always found ways to get themselves killed. Often explosively"; Grace longs to escape it all and have "something to break up the monotony, [and not] fade into the hills like one of those solitary ghost-people, who spent their days listening to the wildwinds batter their corrugated shacks." Poetry!

And it isn't just the writing, of course. The characters are well-developed and intelligent. Their relationships are complex. The story itself is unpredictable yet flows naturally and believably. The cliches of drunken parties, geeky lab partners, clueless mothers, and so on are all present, but Hubbard waste no times on them (they are simply part of the landscape, placed in the story to make the scenery look familiar). Instead, she keeps the focus tightly on Grace and Mandarin's relationship and lets it unwind in a way that leaves the reader completely hooked to the end.
Posted by Paul at 4:11 PM