Living On Impluse, by Cara Haycak 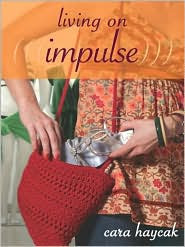 Mia has a number of issues: she's addicted to the rush she gets from shoplifting, her friends are beginning to give up on getting her to go straight and are abandoning her, and she is fighting with her mother. Then, things start to get worse when she gets caught and is forced to take a job at an entomology lab in order to pay restitution. She compounds her troubles when she sneaks into a bar and gets assaulted. And, at her lowest moment, her friends abandon her and her mother starts drinking.

The overall result is a strangely uneven novel. Haycak does a decent job of setting up conflicts (although she probably makes her story overly complicated by piling on so many). She has good pacing and sets up realistic challenges, carefully explaining why the issues should not be easily resolvable. But, it's at this point that the narrative goes off the rails. Rather than play these out, we get sudden and far-too-perfect solutions to each of the problems! The more egregious examples include how quickly Mia's mother realizes that her alcoholism is a problem (one little bender causes an overnight conversion) or how Mia changes from snotty brat to conscientious scientist just by looking at a set of fresh bug larvae. Having set up the conflict, Haycak doesn't have the patience to shows us a realistic resolution, so basically cheats with happily-ever-after sentimentality.

I also found Mia to be unrealistic. She's a maddening mix of bad decision skills and mature intellect. She's able to rationalize why her choices are bad yet makes them anyway (which makes little sense at all). I'm fine with thoughtless bad decisions, but not consciously inappropriate ones. And her hypocritical turn against her former friend Gael seemed out of character and actually cruel.

There's potential here, but it is half-realized. What started as a story about addiction and compulsive behavior just becomes a muddle of too-good-to-be-true solutions that ignore the issues that were brought up.
Posted by Paul at 1:46 PM