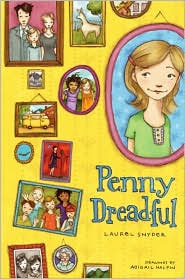 Penelope is bored with her ten year-old life and dying for an adventure, something more interesting than spending her days at home (more or less) alone, with only her tutor and her books to keep her occupied. But then suddenly, a whole series of things start to occur: her father quits working, their home and their finances fall into disarray, and the family decides to live the City and move to rural Tennessee to a house that Penelope's mother has inherited.

But that's just the start of an adventure as the family meets the odd inhabitants of the town of Thrush Hollow. From the girl who collects dead animals to the boy who's never allowed outside and is allergic to everything, and the crazy girl next door named Luella, there's far more going on than Penelope might ever have dreamed possible. Throw in a search for hidden treasure, Mom's new career in sanitation engineering, and Dad's discovery of his inner cook as well! Finally, there's some great lessons about stepping outside of your comfort zone and embracing diversity as well.

It's a frenetic and slightly random book, which defies expectations and conventions. The writing is light and lively, as one would expect in a book targeted at middle readers, and it never takes itself too seriously (even when dealing with some serious topics). Occasionally, reality (mostly in the form of financial woes) pokes up its head, but nothing gets too dark and most things wrap up nicely, but fairly believably.

What makes the book outstanding is how well Synder keeps us on our toes. A bit too often for my taste, this is accomplished by introducing another oddball character, but mostly the book just avoids predictable plotlines. I fear the book might be a bit too strange for many readers, but its quirkiness makes it at least an enjoyable bedtime read.
Posted by Paul at 8:09 PM