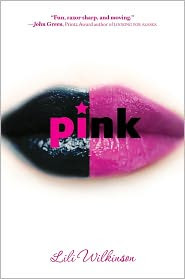 Ava has been dating Chloe for some time. Chloe is funny and sophisticated. Ava is awkward and shy, and feels insecure when she compares herself. It doesn't help that Ava's parents love Chloe (in Ava's mind, this is because Chloe is the self-assured intellectual that they wish their own daughter would be). Ava's doubts lead her to wonder if maybe she really isn't in the right relationship. Is she even gay? Ava really likes being with Chloe but she also wants to do things that Chloe doesn't, like wear pink.

So, when Ava is offered the opportunity to transfer to an elite private school, she sees it as the opportunity to reinvent herself (the first thing she does when she gets there is covertly start wearing pink!). But the change is also an opportunity for Ava to change everything else about her. She decides to not mention her relationship with Chloe and she hangs out with the popular (straight) girls who try setting her up with a boy.

What Ava discovers from this is that there are no simple answers. She is no closer to fitting in with these kids than she was with the ones in her old life. Far worse, she is now living a double life (still with Chloe at home, but now trying to play it straight at her new school). Nothing feels right. Of course, it is inevitable that the two worlds will collide. When they do, Ava makes a mess of it -- not so much because she has been sneaking around, but because she cannot choose between the two lives.

In the world of LGBT teen fiction, we've seen plenty of stories about teens coming out, but I don't recall reading a book about a teen who was already out but struggling with whether she was really gay, straight, bi, or none of the above. Ava is a complex character and feels quite true-to-life as she finds that she really doesn't fit into any pigeonholes (try as she might to do so). This makes her feel familiar and sympathetic and teens who struggle with identity issues will be drawn to her. This is a novel then that doesn't feel the need to preach any particular orthodoxy, but rather presents the idea that it is OK to not have a sexual orientation figured out (good words are also written about the right to embrace geekdom). Wilkinson's writing is honest and insightful.

It helps that this is also a smartly written book. It is funny and moves at a decent pace, while making a number of good points about its topic. While the overall themes of identity and personal growth are well-established, Wilkinson manages to deal with them as if this is entirely new territory. The key is that she is brave enough to not present a solution, but to say that coming out is not a solution in itself (it may, in fact, only be the beginning of a journey to become comfortable in your skin). Original and highly recommended!
Posted by Paul at 12:49 PM