The Popularity Papers: Research for the Social Improvement and General Betterment of Lydia Goldblatt and Julie Graham-Chang, by Amy Ignatow 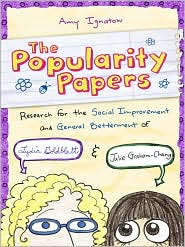 Lydia and Julie are a pair of fifth graders with the desire to become popular before they reach Junior High. To do so, they want to research the popular girls in their grade and learn how to emulate them. With luck, they will successfully master the secrets of popularity and avoid the fate of becoming like Melody, Lydia's older goth sister.

The result is a series of misadventures ranging from sprained ankles and bleach burns to embarrassing auditions and broken hearts. It's all in good fun and wonderfully illustrated by the two girls (through the creativity of Ignatow) in a "notebook" style that simulates notes that the two girls pass back and forth. Lydia's cursive writing and stick figures are perfectly offset by Julie's cartoons and block script. The result is a fast-reading, but authentic and touching, story of the friendship of two girls. So realistic, in fact, that I found the experience voyeuristic.

I'd like to think that young middle readers would enjoy the girls and their misadventures and find the multi-media format of the book appealing. Older readers, while finding the girls' behavior childish, might still find something to love in the honesty that they bring. And there is plenty of inside humor for adults in here as well.

Julie's non-traditional family (she has two dads) is treated matter-of-factly. Only a single mention of prejudice from one of the girls' peers even acknowledges that there might be any sort of issue here. As another reviewer remarked, it's nice to have LGBT themes in an MG book without any screaming highlights.

Personally, I probably won't read the latter books in the series (there are at least two more), but that's because I tend to not read middle readers (and I get really weird looks from my neighbors on the plane when I read something like this). However, I think the series is good and worth reading.
Posted by Paul at 7:16 PM