This Girl Is Different, by J J Johnson 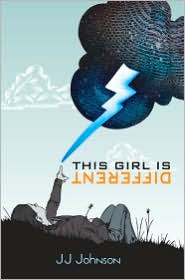 As a social experiment, after being home schooled for many years, Evie convinces her mother to let her attend public school for her final year. Her mother reluctantly agrees and things get off to an auspicious start when Evie meets two of her future classmates, Rajas and Jacinda a few days before classes start. Evie and Jacinda become close friends and Evie develops a serious crush on Rajas.

From being homeschooled by her independent and freethinking mother, Evie has developed a tendency towards being outspoken and she rebels against the cliques and social norms of the school. This hurts her ability to make friends but pales in comparison to the trouble she starts when she starts speaking out against the teachers! A plan to out an abusive gym teacher and a sleazy social studies teacher who is hitting on students backfires horribly and Evie finds herself in deep trouble.

The book can get a bit preachy at times, but Evie is a spirited and spunky character with a lot of appeal. The writing is sharp and fresh and more original than most of the stuff that is out there. I found that the ending dragged on a bit and fell into melodrama, but I liked Evie and her mother so much that I was willing to give the book some slack.

I especially wanted to give a special shout out to some very well written sex scenes. In my experience, sex in YA books fall into two categories: hot sweaty stuff worthy of a Harlequin novel and Judy Blume-style how-to's with lots of encouraging commentary about how wonderful/natural/beautiful it all is. Neither approach has ever struck me as meaningful. Johnson takes an entirely different approach: portraying the hormonal rush and the intense desire (coupled by regret and fear) that all gets mixed together. Nearly thirty years later, that's how I remember it and I think it's more honest than most other authors I have read. The feelings that Evie describes sounded painfully authentic to me. Serious props to Johnson for doing such a brilliant job!

In sum, this author is different and I loved her voice!
Posted by Paul at 9:57 PM