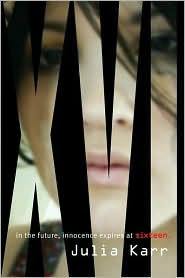 In this version of the future, girls get tattooed with an "XVI" on their wrist when they turn sixteen. This is used to signify that they are sexually available to anyone who wants them (the girls don't get any say and are instead socialized to sexualize themselves for men). Not only that, but society itself is now ruled by a totalitarian regime that is run by the media, who monitor their subjects and bombard them with constant "verts" to convince them that they are actually happy (and also coincidentally to spend their money on products).

Nina is on the verge of turning sixteen and, unlike her best friend Sandy, is not so sure about becoming a media-vaunted "sex-teen." While Sandy eagerly laps up the media's message of sexual commodification as a means to escape her economic disadvantage, Nina's mother has been covertly teaching Nina that there are alternatives. The state is on to Mom's dissident activities as a "non-con" and eliminates her. Mom's suspicious murder prompts Nina to fight to uncover the truth about her society, her family's role in a resistance movement, and her own importance in changing the status quo.

While full of many interesting ideas, Karr's writing can be a bit heavy handed. I like the idea of highlighting the hypersexualization of "sex-teens," but much of the rest seems undeveloped (like the intentional malnutrition of the poor) or silly. Karr stumbles particularly as she attempts to link the present with this future to show the reader how we got there -- an exercise which mostly seems to be driven by an attempt to propagandize for the other side.

The writing is strangely clumsy as well, but here I blame the editor. There is a fair amount of repetition (where things get restated multiple times), as if various drafts had never been vetted for continuity. The grammar also sounds a bit off (although sometimes this seemed like an attempt to add a few blemishes to the narrator). The sense I got is that the story had a lot of great ideas, but that the editor neglected the necessary effort to pull it together. As if selling the book on its ideas (instead of its writing) was more important. Media controlling our lives indeed!
Posted by Paul at 8:56 PM