The Friendship Doll, by Kirby Larson 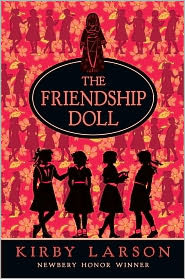 In 1927, fifty-eight delicately-built and life-sized dolls were sent from Japan to the United States as "friendship ambassadors" to reciprocate an earlier gift from the US to Japan, and to facilitate greater cultural understanding between the two countries. In this novel, Kirby imagines how one of those dolls might have changed the lives of four girls over the years. The doll (Miss Kanagawa) comes to life at optimum moments to affect the children and guide them towards making correct life decisions.


It could be a bit creepy to imagine an animate doll (and the idea isn't entirely original), but the question of the doll's consciousness is kept vague and isn't terribly crucial to the story. Instead, we can almost imagine that each of the doll's young interlopers reached their epiphany on their own. The result is that Miss Kanagawa becomes a conduit for telling this more general story about friendship and loyalty (thus, the story reminded me more of violin in The Red Violin than Chuckie in Child's Play II!). Each episode is a moving story and they are surprisingly well-connected to each other. The ending is a bit anti-climactic but doesn't detract from the story.


One of the real strengths of this book is the strong basis of the story in historical fact. The settings are familiar and well-worn (Dust Bowl refugees, Depression survivors, New York Society figures, etc.) and one could have wished for a wider spread of years (why not put a story in the 50s or 60s?), but Larson does well with what she picks to cover and the stories will entice young readers to learn more. The historical notes at the end are particularly well-written and noteworthy. 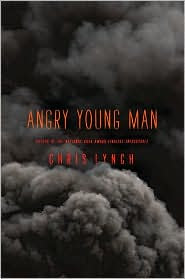 Robert has a lot on his shoulders. His Mom struggles to make ends meet and provide food on the table for her boys. Robert has this to worry about and also his younger brother, who seems a bit bipolar and has trouble putting things in perspective. Xan (the brother) is obsessed with social justice and wants to right the wrongs of the world. Robert tries to give him perspective and keep it together. But as Xan gets sucked under the spell of a charismatic nihilist, Robert discovers that he is not so immune himself from the charms of anger. The results are explosive and nearly tragic.


Lynch's novel Inexcusable was a near miss for me, with its over-simplification of male violence and pendantic storyline. This, however, is another story. Lynch does a fantastic job of capturing fraternal bonds and the guilt and loyalty (or is it guilty loyalty?) that underlies the relationship between brothers that have faced adversity and not come through it as well as social norms dictate that they should. There's aching familiarity to this story, even if the violence is alien territory.

Seldom do I find books about young men that ring true (too many hang on the moments of libido for comic value) but this one really grew on me, even if the story was disturbing and a turn off. I give serious props to Lynch for presenting a story so authentic! It's not a pretty sight, but the love that these boys feel for each other will touch you.

How I Stole Johnny Depp's Alien Girlfriend, by Gary Ghislain 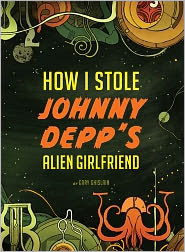 David is a shy fourteen year old who fantasizes about girls, but has trouble relating to them. He lives with his father, a psychologist who specializes in troubled teens, one of which is the mesmerizing Zelda, on whom David develops a serious crush. The trouble is that Zelda is criminally violent and convinced that she is an alien sent to abduct her "chosen one" (Johnny Depp) and return him to her planet to be her slave. But David is as obsessed with spending time with Zelda as Zelda is with kicking policemen and stealing away Jack Sparrow. And so an unlikely alliance forms with David helping Zelda escape and joining forces to help her complete her mission. Much mayhem ensues and the plot veers from the barely believable to the totally insane.

It's a cute and quirky story, but not nearly as funny as the title implied (or I was hoping for). There are occasional wise cracks and situations that will prompt a chuckle, but the story falls into silliness a bit faster than humor. Written by an ex-pat in France, it's got that weird Gaullist sense (these are, after all, the folks who find Jerry Lewis amusing). It's also a bit disturbing the way that the female characters walk over David. I imagine it was supposed to be funny to watch how helpless David is against feminine wiles, but it just seemed perverse (as if placing women on pedestals was somehow amusing). Overall, a promising premise with a dud delivery.

Across the Universe, by Beth Revis 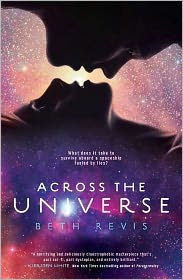 When Amy's parents decide to join the mission to Centauri (which will take hundreds of years and require them to be cryogenically frozen), Amy is offered the chance to stay behind on Earth. Fatefully, she decides to come along. Deep in the future, Amy awakens to discover that an accident has caused her to be unfrozen early. But that is the least of her worries. Something has gone terribly wrong since the ship left Earth and it is now being commanded by a dictator who has enslaved the support crew with drugs. Worse, someone is murdering the frozen crew before they can reach their destination.

Billed as "entirely original" on the jacket, people who know their sci-fi will recognize Ben Bova's Exiled from Earth series here (and a few allusions to some other classics). But even if Revis owes a debt or two, she spins an exciting story. It gets a bit complicated and runs long (the last ten pages in particular were unnecessary and needed to be excised), but the characters are interesting. The plot is well-paced and the mysteries are unraveled at a good pace. Nothing extraordinary but it is decent science fiction and a good read. 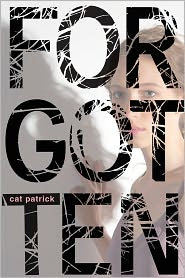 London has amnesia and manages to forget everything that's happened during the day when she goes to sleep every night. To cope with this, she leaves herself notes that brief her on what has just happened. So far, so Memento (a totally cool movie from the 90s with a chunk of the cast of The Matrix in it), but the weirder part is that what London does remember comes from the future. So, while she can't remember anything that has happened, she knows what will take place soon.

The situation becomes complicated when London meets a boy (Luke) who she can't identify (given her ability to know the future, this can only mean that he doesn't have one, which is odd since she's madly in love with him). Luke's existence is more than some sort of paradox -- he's triggering other sorts of memories in London's mind, some of which are quite disturbing.

The premise of this unusual story can be a bit hard to get your head around (and it suffers from a few logical inconsistencies), but once you let go and just start trusting the author, it takes off nicely. I was less thrilled with the rushed ending, but up until the last twenty pages or so, I really liked the way that the story unfolded, with a lot of twists and good pacing. And for such an ambitious premise, Patrick really does a great job of putting it together.
Posted by Paul at 7:36 PM No comments: 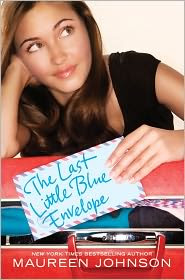 (If you haven't read Thirteen Little Blue Envelopes yet, you might want to do that before reading this sequel or its review! You have been warned!)

I'm not a big fan of sequels, but I think that this was one I was really looking forward to read, precisely because the idea of a sequel was never in the cards when the first book appeared. Instead, we were left with such an ending that the average reader was simply dying to have the story get concluded. After trudging across Europe through twelve envelopes with our heroine, it was a major annoyance that the thirteenth and final letter had been stolen and we ended up (much like our heroine Ginny) without any real sense of closure (fairy tale substitite endings aside!). I accepted that it was life and was prepared to move on, but was ecstatic when I read that there was a sequel and that the lost letter had been found!!

In this sequel, a few months have passed and Ginny is working on her college admission essay without a lot of success. She wants to recount the story of her trip and the twelve envelopes, but is suffering a major case of writer's block that gets in the way. In the midst of that frustration, she receives an email from a stranger named Oliver who has recovered the stolen letters. He offers to return them, but there's a catch: the last letter mentions a piece of Aunt Peg's artwork (potentially worth a fortune) and how to locate it. Oliver wants a piece of the action and won't turn over the letter unless Ginny agrees to take another trip through Europe on one final scavenger hunt. Against any rational advice, Ginny agrees to do so.

Along with old flame Keith (and his new girlfriend Ellis), Ginny and Oliver travel through some familiar territory and some new stomping grounds in search of Aunt Peg's artwork and some closure to a hard-earned quest. The results are at once predictable (Ginny and Oliver will naturally hit it off despite their awkward start) and fun (even old places look different a second time around).

The sequel, with its lovely detail and eye for color, will appeal to armchair travelers (Johnson has obviously collected her fair share of travel yarns) and the romantic elements have a suitable level of involvement to snag the reader. Mostly, though, this novel improves upon its predecessor as it closes with less convenient solutions and more open-ended conclusions. Yes, Ginny lives a fairly charmed life (worthy of a Meg Cabot novel), but things here are left more realistic than before. At the very least, Ginny has moved beyond her late aunt (and even her childhood) and is ready to impart on more mature adventures. The demand (and temptation) for a third installment are substantially reduced.
Posted by Paul at 6:16 PM No comments: