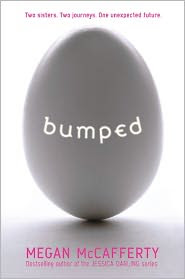 In the near future, a virus has turned the majority of people sterile by the time they turn eighteen. Now, only teenagers can have children. And that has had two important consequences: becoming a pregnant teen has become both cool and the economic value of pregnancy has given young girls a new (and mostly false) sense of agency (with no small irony, being a professional surrogate mother is now so lucrative that girls do it to put themselves through college!).

Enter Melody and her twin sister Harmony. Separated at birth, Melody has grown up in this pro-natal culture and dreams of signing a major contract as a professional surrogate. Harmony, in contrast, has been raised in a religious commune where girls marry in their early teens to fulfill their child-bearing duties before they are too old. Both young women have totally swallowed the myths of their culture, but meeting each other opens their eyes a bit. And a case of mistaken identity (which is both humorous and tragic) that causes the two of them to swap roles sends both girls in very different and unexpected trajectories.

McCafferty is probably best known for her light beach-readers, so the cutting nature of this dystopia will surprise her fans. While she certainly has a few harebrained ideas, McCafferty's story provides some wonderful observations about popular culture, the commodification of bodies, and the similarities between our culture's worship of youth and of motherhood. It's an edgy idea and if it sparks some thought about the way that the glamor of youth and motherhood are basically sold the same way to children, so much the better.

As for the writing, the story starts a bit slow and the slang used in the book is a bit hard to digest at first, but it has a wonderful irony to it that hooked me (although digs against social networking will probably not age well). The characters themselves are not terribly interesting and things wrap a bit too fast towards the end (with the exception of the inevitable loose end that was left for the equally inevitable sequel), but this is a story about an alternative reality more than a book about characters or even plot. Decent social satire.
Posted by Paul at 4:18 PM