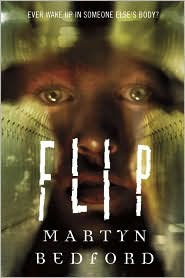 When Alex wakes up one morning, he notices that things are definitely wrong (wrong bed, wrong room) and when he looks in the mirror he has the biggest shock of all -- he's in the wrong body! Somehow, he's become another boy altogether -- Philip "Flip" Garamond. And the two of them couldn't be any more different: Flip is apparently a rap-loving jock with a lot of friends and a way with the women, while Alex is a shy nerd. Trying to maintain the pretense of being Flip on the outside while still being Alex inside is difficult to do, but no one will believe Alex that he isn't Flip. To them, their old chum Flip is just acting a bit peculiar.

Time is running out. As Alex learns more about what has happened to him (and Flip), it becomes clear that if it is ever going to be possible to switch back, it will have to be soon. However, the process is anything but clear (and maybe even impossible?). So Alex must hurry to figure it out or risk being trapped forever in the wrong body.

There's no major emotional lesson here, but plenty of good mind-twisting suspense and adventure. Bedford has excellent pacing and the story keeps you entertained and enthralled. I was definitely sucked in and found it to be a good read.
Posted by Paul at 11:30 AM