I'll Be There, by Holly Goldberg Sloan 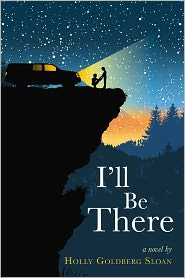 When Emily humiliates herself singing "I'll Be There" at church and Sam happens to witness the event, a string of events ensues that would defy reason, except for the careful chronicling of author Holly Goldberg Sloan.

Sam (and his little brother Riddle) have spent their lives being dragged around by their mentally unstable outlaw father Clarence. Having never known any other sort of life, the hardships that they endure seem normal. That is, until Sam's chance meeting with Emily introduces the boys to a possible alternative life. But as the story patiently explains, everyone has different motivations and conflicting needs, and these can have entirely unexpected consequences.

This story's unusual calling card are all of its digressions. The tale itself might have been told in a third of its pages, except for Sloan's practice of backing up and letting each new character essentially tell their life story. In some hands this might be quite annoying as it inevitably leads to delayed gratification for the resolution of the latest plot twist. But here, each detail is somehow important to the plot and it all comes together in the end. Moreover, you know it will all come together in the end, so you just ride this slow train and enjoy the scenery along the way.

While I enjoyed reading the book, I am unclear who is the intended audience. As an adult reader, the maturity of many of the situations (and the adult details of many of the characters) was a draw. But how much patience would a younger reader have for taking in all the details of someone's failed marriage or career frustrations? And as a story so long on action (and low on emotions or feelings), it really seemed better written for younger readers. So, I'd argue that it is a book for younger readers, but like a children's movie, there's plenty here for the adults to enjoy. That would work in a film, but in a book it seems a bit more muddled.