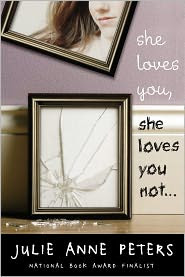 When Alyssa's father discovers that she is a lesbian, he throws her out of the house and she has to go live with her estranged mother in a small town in Colorado. Traumatized by the events that have led up to her exile (which include a powerful and ultimately obsessional relationship with a girl two years younger) and feeling alone and abandoned by family and friends, she tries to adapt to her new surroundings. In doing so, she discovers that her understandings of her own family and herself are not nearly as clear as she once thought, and that the path to recovery will take her to very different places.

Peters has made a great career out of writing insightful books about adolescent LGBTs. While they share that theme in common, each novel is strikingly unique. Her characters are thoughtful and introspective, but believably immature. Sexual orientation is core to the stories and she does a great job of illustrating both universal truths about all teens as well as the unique issues that young people face if they are gay. And so, this story shows us how the interference of adults (and the homophobia of society itself) complicates the already volatile nature of adolescent romance. How young gays struggle with their identity, not yet certain of which way they want to be (and thus mess with each other's heads as a result) becomes a story which is neither superficial nor didactic polemic. Instead, homosexuality is essential to the story that is ultimately not about sexual orientation at all.

The book does have some rough spots. We have numerous subplots (Alyssa's relationship with her parents and her step-mother, romantic betrayals both between children and between adults, some natural disasters, several road accidents, and a little workplace drama). As usual, these seem distracting from the story, as if Peters wasn't too sure where any of them were going when she wrote them in, and then couldn't bring herself to prune them out later. The stylistic device of doing flashbacks in second-person narration is awkward as well. Still, the overall sensitivity and sympathy of the story make this a great book for readers, regardless of which way they swing.
Posted by Paul at 2:09 PM