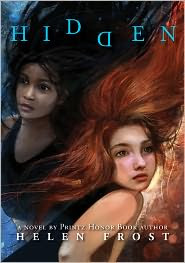 When she was eight years old, Wren was kidnapped by a car thief who didn't notice that she was in the back seat of the car he was stealing. Scared, she hid and survived for several days before escaping. And while her feat required a lot of quick thinking, she was helped at the time by a girl of her age named Darra (who was also the thief's daughter). Darra secretly slipped her food and kept her existence a secret from her Dad. But when Wren escaped, the police came and arrested Darra's father, for which she blamed Wren.

The two girls never met up again, until five years later, when they end up - by chance - at the same summer camp. At first, they ignore each other, suppressing memories of what happened and pretending that they don't know each other. But the pain of it all is too much, and unsettled scores rise to the surface. Once aired, the two girls find common ground for an unusual friendship.

Told in alternating viewpoints through two distinct styles of free verse, this is a short but ambitious literary project. There are instructions on the end of the book for how to read the verses for hidden meaning and it is well-worth reading the book twice (once straight through and the second time following the author's instructions). It's clever but not the sort of thing that a lot of young readers will really care about. The verse itself is fairly bland and lacks intrinsic value. The idea for the story is interesting, but the end product is not so impressive.
Posted by Paul at 5:54 PM