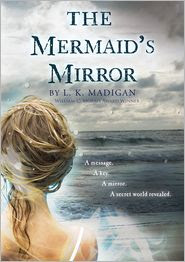 Lena loves to be by the ocean and dreams of learning to surf. However, for some reason, her father (a legendarily good ex-surfer himself) won't let her try it. But that is just the beginning of the mysteries. There's also the disappearance of her mother when she was younger (which neither her father nor step mother will discuss), a deranged man who wanders the beach looking for someone, and sightings out in the water of strange creatures that look surprisingly human. But as Lena finds out the answers to these mysteries, it forces her to make decisions about her future that have no good solution.

A surprisingly limp telling of the typical YA mermaid tale. It lacks the humor of Real Mermaids Don't Wear Toe Rings or the warm appeal of The Tail of Emily Windsnap. Instead, we get a familiar story of a half-human, half-mer child who seeks out her absent mother. As if that wasn't uninspiring enough, dramatic points bob up to the surface in this story and then sink to the bottom with little notice. At least two separate romances are introduced but left undeveloped. The end result is a story that covers the bases, but never really engages any particular theme.
Posted by Paul at 2:15 PM