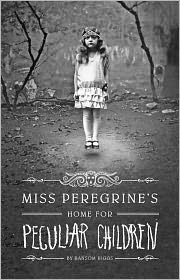 When Jacob's grandfather is killed, Jacob seems to be the only person who realizes the truth that grandpa was killed by monsters. Jacob himself doesn't want to believe it. He had always been skeptical about his grandfather's stories about evil creatures.

Grandfather was always telling stories. About the boy made up of bees, or the girl who floated in the air, or the invisible boy, or the large bird who took care of all the "peculiar" children when grandpa was still a child himself. But Jacob's own experience convinces him that these stories, which always seemed like fairy tales, must have an element of truth. And now Jacob wants to figure out what that truth was.

Along with his father, he travels to an isolated Welsh island and finds the ruins of the orphanage where grandfather lived. And, while the initial search is fruitless, Jacob eventually finds clues of what happened to the peculiar children, and what dangers lie ahead.

The most striking thing about this book is not so much the story, as its presentation. Through some friends who collect antique photos, Riggs has found several dozen unusual anonymous photographs and created a story that links all of them together. Spread throughout the book, these reproduced images are creepy and yet also beautiful. As a collector myself, this was an innately appealing concept and I enjoyed the design immensely.

Beyond the artistry and the sheer great look of this book, the story is also fun. More time could have been spent describing and developing the peculiar children themselves (who remind me a bit of the teen X-Men), but Riggs has a story to tell and he moves that along quite well. There isn't tremendous emotional depth here, but it's still a decent fantasy-adventure read.
Posted by Paul at 2:44 PM