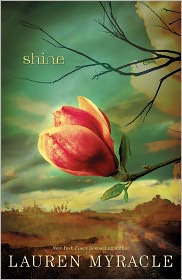 Over the past couple of years, Cal has shut herself off from her friends and become a loner. However, when an old friend Patrick is found badly beaten, bound to a gas pump, and with the nozzle shoved down his throat, Cal finds she can't continue to be shut down. The brutality of the crime (far too easily blamed by the police on out-of-towners) drives her to try to uncover the culprit. But as she starts to poke around, she quickly learns how far people will go to hide the truth and how much the people of her town have to fear. Rather than discourage her, the search emboldens Cal to dredge up the facts of what happened, even as it threatens to reveal her own truths to the world.

A surprisingly complex story of rural America. This isn't the simpleton hillbilly America of so many novels, nor is it an innocent and sweet place. Myracle's country, instead, is a world where meth production and consumption has invaded, driven by the despair of a world without jobs or future. It's a place where people cover up the truth because they realize that there is no point in knowing it. It's a grim world with its own sense of justice and reciprocity.

The book is impressive. The explanation for what happened to Patrick (and why it happened) is only arrived at through an honest (and painfully slow) unraveling of layer upon layer of smaller hidden truths. The pacer is pitch perfect. On only on a few occasions did I find myself ahead of the narrator in figuring things out. That kept me hooked and made the reading (aside from a fairly slow start) into an addiction.

If there is a fault, it is the nature of the story. I found myself disliking the characters so intensely that I began to not care what happened to them. That again is actually a credit to Myracle's writing. The characters are so well-formed that my dislike came because of who they were not because of how they were drawn up. So, while the story and its characters disgusted me, I still found myself drawn in.
Posted by Paul at 12:56 PM