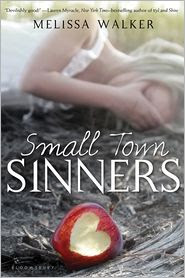 As the youth pastor's daughter in her town's major church, Lacey is a fervent believer in it and her congregation's good works. The highlight of which has always been the annual "Hell House" (a melodramatic morality play used to acquire converts) that her church's teen group puts on to show the downfalls of sin. And while Lacey has come to see its flaws as she has grown older, she still longs to be a star and help save souls.

However, things are starting to change. A childhood friend named Ty moves back to town. He has secrets and hides his past but still makes her question her faith, with his ideas and statements. And around Lacey, things are happening that challenge her assumptions about moral questions being so cut and dried. Turning to her parents doesn't help. They don't have answers and even try to dissuade her from asking her questions. So she finds herself striking out on her own.
When it comes to teens and religion in YA, this theme of independent youth challenging rigid paternalistic faith structures is a common approach. And the idea of using an outsider bad boy to trigger the crisis of faith is a similarly familiar approach (think Footloose for example). The problem that most of these stories have is that the heroine's faith is usually a paper tiger -- easily challenged with a bit of common sense and then summarily vanquished. That's an easy out and certainly an issue in this book. Walker is obviously not a fellow-traveler of Evangelicals and shows that she can't accept that people would actually believe this stuff. But she also has the good sense to respect that her characters' faith would be difficult to dislodge. And so, while Lacey is shown questioning her faith, she does not simply toss it aside. That makes this story stronger than most.

However, I'm still seeking a book abnout teens and religion that does not walk us through the process of how the characters reach the conclusion which the author has already decided that they should have. In my mind, Walker's antipathy to Evangelicals is almost as bad as the Christian Inpirational novels that I occasionally pick up. It's a disservice to readers to portray religious faith as something so easy to resolve. So, you can put this in my want-to-read category: a book about a young person seeking faith who finds it in the end, but where the particular direction the book will take is not a foregone conclusion from page one. (My other big literary wish, of course, is the warrior princess who enjoys embroidery and slaughtering her enemies with a kick-ass sword!)
Posted by Paul at 10:02 AM