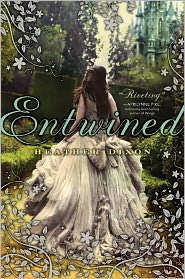 After their mother dies, Azalea and her eleven sisters are forced to spend a year in mourning, locked up in the castle, forced to wear black, and (worst of all) forbidden from dancing. But then the children find a secret passage to a magical land where beautiful people dance the night away. Managed by "Mr. Keeper," the girls are told that they can return to dance every night. They do so and it relieves the sadness that they feel at the loss of their mother. But Azalea becomes suspicious of Mr. Keeper. It all seems too good to be true. And before it is too late, she must figure out what is up!

Based on a fairy tale called the "Twelve Dancing Princesses (with which I am not familiar), this retelling fleshes out the story to nearly 500 pages. It moves quickly enough, but isn't all that well-written. Handicapped by my lack of knowledge of the original source material (or, apparently, the "classic" Barbie version!), I relied on the storytelling to lead me through the story. And I found that it just didn't hold up. Instead, I was continuously having to double back and re-read passages to figure out what was going on. This grew frustrating and, as a result, I found the writing tiresome. As a tribute, it might be a formidable work, but as an original story, it is lacking.
Posted by Paul at 4:30 PM