The Misfits, by James Howe 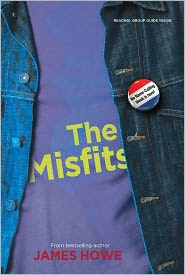 Bobby is a member of the "Gang of Five," a group of four (!) kids who don't fit in and have been subjected to a great deal of teasing because of it. Addie is the outspoken activist, Jim the fey guy who used to wear dresses when he was little, Skeezie needs to work on his personal hygiene, and Bobby is overweight. Outcasts at school because of their quirks, the four friends meet in the afternoons at a diner to plot against the injustices of their world. At first, their target is the student council elections, but when their plans go awry, Bobby makes a suggestion that will change all of their lives, and potentially change things in their school for everyone else as well.

While a cynic might consider the premise of this story to be idealistic (sort of a pay-it-forward for tweens), there is no denying the actual impact of this story in the real world. Thanks to it and the efforts of the author, an anti-bullying message has been promoted across the country, inspiring anti-bullying days and no-names weeks in a number of middle schools.

But beyond the impact of the story in young peoples' lives, the book itself deserves special praise. My usual complaint about books written for middle readers (and I include some of the real classics like Judy Blume in my criticism) is that the authors of books for this age group don't seem to have much respect for their readers, talking down to them and lecturing, connecting dots that a kindergartener could probably figure out on their own. Somehow, no matter how bright the young protagonists of these books, the pearls of wisdom always have to come from adults. Not so here. The adults are far from stupid or cluelessness, but the good ideas and insights come from the kids themselves (and in words that seem authentic and believable). This makes the story so much more effective, because who wants to be preached to by adults when you are thirteen years old?
Posted by Paul at 6:55 PM