The Rites and Wrongs of Janice Wills, by Joanna Pearson 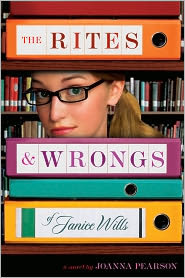 Janice thinks of herself as an anthropologist of adolescence in her small North Carolina town. In some ways, this is a coping mechanism, giving her the opportunity to observe, with detachment, the behavior of her peers (and thus ignore her own shyness and social awkwardness). However, as she discovers when she attracts the attention of a moody heartthrob, it also creates the impression that she is a snob and an elitist. Realizing in the end that her attitude is the cause of many of her problems, she manages to salvage much of her life with some mental readjustment. A beauty pageant also plays a role in the transformation.

The book tries hard to win you over, but it fails on nearly all fronts. The "anthropological" observations try to be clever and witty, but we've seen this done better (for example, see the Popularity Papers, reviewed in July, or re-read a classic like Speak). The relationships (whether between Janice and her best friend, between Janice and her mother, or between Janice and either of the two boys in her life) are underdeveloped and fall flat. Janice herself is contradictory, frequently switching directions in mid-stream. At first, she resists participating in the beauty pageant yet seems to adapt to it easily enough in the end. This leaves us wondering what Janice wants (or, more to the point, what Pearson wants us to surmise about Janice's desires). In the end, the book doesn't have much to say (and what it does say, we've heard before).
Posted by Paul at 4:47 PM