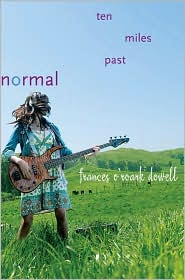 When Janie was nine years old, she dreamed of living on a farm. To her surprise, her parents decided that it was just the thing they all needed and decided to take the plunge. But what seemed like so much fun as a young child becomes a major source of embarassment as a teen. Fourteen year-old Janie desperately wants to hide the fact that she's a farm girl. She'd like to be more "normal," but High School doesn't seem to be an easy place at which to do that. She can't find a clique or a club to join. She hides out in the library during lunch. It doesn't help that her schedule's separated her from her Middle School friends.

The only extracurricular activity that attracts her is band jam, where she discovers an affinity with the bass guitar. It is the patience and attentiveness of a boy with the unfortunate name of Monster who teaches her the intricacies of the instrument, but this isn't really a romance (although a few potential romances fizzle out). Instead, goats and civil rights activists play a significant role in the story.

O'Roark Dowell has a tendency to write about young teens in transition and she carries on the theme here. Some of the strongest passages deal with Janie and her best friend Sarah's changing relationship. There's also some nice realistic stuff about the awkwardness of romantic feelings at this age. And in general, the tone is authentic and age appropriate.

However, the story itself is so random and across the board that it's hard to know how to read it. Neither the Civil Rights stuff nor the references to the farm seem related (more of an add-on than an essential part of the story). It seemed like an attempt to dump in a lot of cool ideas and then try to form a story around them as an afterthought.
Posted by Paul at 2:14 PM