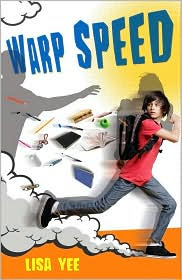 Marley's the kind of boy who likes to maintain a low profile. Choosing the word to describe himself at the start of the school year, he picks "invisible." It's the best way to be, especially if you are a magnet for every bully in the school. Hardly a day goes by when kids aren't punching, kicking, or otherwise taunting Marley.

To cope, Marley has a Star Trek obsession, burying himself in trivia and trying to guide his life through the characters of the show (WWSD? -- what would Spock do?). His friends in the AV club seem to cope similarly: Ramen loves Star Wars and the new kid Max loves Batman. Yet, it's Marley who gets singled out for special attention in the halls and after school. And it's Marley who will surprise the others (and himself most of all) by revealing particular talents no one imagined he has.

It's cute, it's feel good, and it's a quick read, but it's terribly pedantic. Consider this the polar opposite of the book The Misfits that I reviewed earlier this week: The anti-bullying message here is muddled and confused, and in the end ultimately dictated by the author since the characters are too weak to figure it out on their own. Marley, we learn, is too dumb to figure this stuff out for 280 pages, despite the help he gets from several adults and from her current and former friends. Instead, the reader is led by the nose to the correct conclusion in the last 30 odd pages: bullying is best dealt with by confronting it. That's simply not very interesting.

One also wishes that Yee hadn't tried to make her characters fans of real science-fiction shows as it quickly reveals her own ignorance of the genre. Better to have made something up altogether. As is, we're faced with multiple references to Star Trek that sounded about as authentic as the history teacher's "rap" songs. And I found myself cringing as much as the students in that class.
Posted by Paul at 7:07 PM