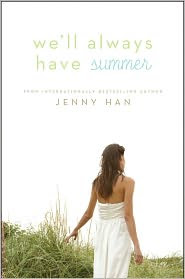 In the third (and probably last) installment of the series, Belly is now in college and she and Jeremiah are dating. As the story opens, there is trouble in paradise: Belly finds out that Jeremiah cheated on her during Spring Break. She confronts him and the incident threatens to sever their relationship. Instead, they reconcile and Jeremiah proposes to Belly. She accepts.

Their families are aghast. Sure, they have always been close, but just about everyone else agrees that they are far too young. Belly and Jeremiah decide stubbornly that they will go ahead, with or without the approval of their families.

Jeremiah's older brother Conrad has his own reasons to object: he's never gotten over his own relationship with Belly. As the days to the wedding approach, Belly herself realizes that she still has feelings for Conrad. The resulting love triangle plays out much as expected, but is no less poignant in its predictability.

While I am not a big fan of series literature and romances usually fall flat (more because I am old and jaded, and less so because of the usual excuse of my gender), Han's trilogy is an outstanding exception. She has a beautiful way of plucking heartstrings and she does so through honest observations. All three of the books in this series are mature, well-written studies of feelings and emotions that ring true for all ages (both the adolescents and the adults seem real and vibrant). Yes, it may be easy to write a nostalgic piece about young love on the beach, but there is an unusual amount of substance and honesty here about what love really does to us. For anyone who has loved another enough to consider marriage, there are moments here that feel familiar.

If I have a complaint, it is a minor one: the epilogue seemed unnecessary and more like a desperate bid to have a happy ending, when a melancholy conclusion would have done just fine.
Posted by Paul at 1:27 PM