All These Things I've Done, by Gabrielle Zevin 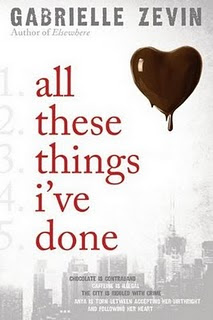 Some seventy years in the future, chocolate and coffee have become illegal and Anya's family is deep in the business of the illicit trade in the substances. It's cost most of the members of Anya's family their lives and now Anya tries alone to look out for her little sister, older and mentally-challenged brother, and her dying grandmother. That's hard to do when your ex-boyfriend tries to rape you and then mysteriously ends up poisoned. And life isn't any less complicated when she falls for the cute son of the assistant district attorney. But Anya takes her loyalty to her family seriously and she'll figure out a way to keep things together, even if the list of her sins continues to grow.

Zevin writes interesting and original books. And while she places this one in a New York City mob family and many of the usual organized crime tropes are present, they are faintly subverted. There are the usual meetings, kissing of cheeks, and big guys with funny names in suits. But Anya herself still hangs out in high school, hides from the popular kids, and dodges trouble with her teachers and principal.

But what has really become Zevin's trademark is her ADD writing style, which is to say that she spends large amounts of efforts setting up a scene and then runs through it quickly. She's excellent at exposition, but not at concluding a story. So, she can send her heroine to prison, filling many pages to set up a prison drama and then just suddenly spring her before any of it plays out. The ending of this book is particularly maddening in this regard as Zevin simply loses interest in the story and wraps up everything in a breathless fifteen pages. I'm not sure if this is intentional or simply a result of Zevin's lack of focus, but it is a bit maddening to be patiently building up the suspense and just toss everything out quickly in the end. And when so many carefully crafted details become superfluous or ignored, it also seems a shameful waste of good writing.
Posted by Paul at 2:59 PM