Notes From the Blender, by Trish Cook and Brendan Halpin 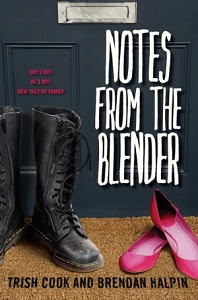 Neilly is having the worst day of her life. In one day, she gets dumped by her boyfriend, finds out that her best friend has betrayed her, catches her Mom in a state of undress with some guy in their kitchen, and learns that Mom is about to marry said guy because she's gotten pregnant. So, it's probably no big deal that the son of the guy who knocked up her mother is a scary heavy metalist with the hots for her.

Not that all is honky-dory with Declan (the aforementioned boy into Norwegian death metal). He's still in denial about the death of his mother and finding out his Dad is going to get remarried is totally not what he had in mind. But he has to admit that the chance to pick up a sexy step-sister would be pretty cool! (ew!)

And so, in alternating chapters (presumably alternatingly written by the two authors), we get the story of how two kids from very different social circles found that they had a lot more in common than they ever imagined. And just about everyone discovers that the world is full of amazing coincidences and that they all have a lot to learn from blended families.

Team-written books are the bastard step-children of YA literature. One imagines that they start in some sort of writer's workshop and just take off from there. Far too often they seem like an exercise in who-can-top-the-other? One writer tries to put the other into a corner and they must make larger and larger leaps of logic to move the story forward. Thankfully, this one manages to wrap things up, but there is a jarring difference of styles between the two writers. Declan's character is noticeably more interesting and authentic than the emotionally precocious and unrealistically mature Neilly. Neilly (and her chapters in particular) were less interesting, more hurried attempts to tie up the chaos stirred up in Declan's chapters. I found the unevenness distracting.

Additional note: when deciding to publish an endorsement of your book from a famous YA writer, make sure that they've read your book carefully first (Reinhardt's mention of Finnish Death Metal on the back cover is unintentionally hillarious)!
Posted by Paul at 6:35 PM

Just wanted to clarify: Dana is a friend of mine and did, in fact, read the book while it was in progress. I initially had Finland as the home of black metal, and further research revealed Norway to be more credible, so I changed it in a later draft. So the error is really mine, not hers.