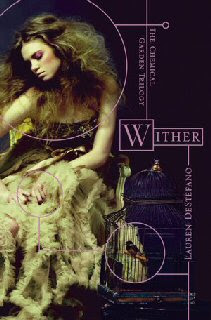 In the near future, a generation has conquered cancer and most other terminal illnesses, providing themselves with incredible longevity as a result. But it comes at a terrible cost. In subsequent generations, all girls die at twenty and all boys at twenty-five. While the long-lived "first generation" searches for a cure, the world outside has unraveled. Global warming has wrecked havoc with the climate. Rich men kidnap girls and build polygamous communes to try to propagate as many times as they can before they die off. Endless orphans are cared for by younger and younger minders. Innovation has been stifled. Humanity risks its own extinction.

We are plunged into this world through the eyes of Rhine Ellery, a sixteen year-old who has been kidnapped and forced to marry one of these rich "governors," along with two other girls. Unwilling to accept her fate, Rhine resists and plots her escape. But the chances of getting away are slim and the temptations of living in her gilded cage are immense.

It's one of the more drearier dystopian novels yet. So, while this new Chemical Garden Trilogy is well fleshed out in a technical sense, it's a fairly claustrophobic story. The focus is on the three girls and takes place mostly on a single floor of the residence where they are imprisoned. There is plenty of action in the plot, but the story is mostly internalized. The themes (polygamy, teenage pregnancy, desecration of the dead, disease, and abuse) are all downer material. The plot never lets up. So, this is the literary equivalent of a bad trip. If you enjoy that sort of thing, the book is well written, paced appropriately, and has sufficient payoff. However, I'll pass on the sequels in search of a (relatively) happier story.
Posted by Paul at 9:59 PM