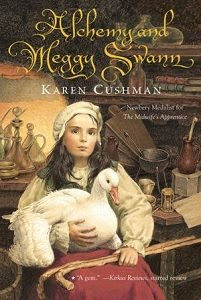 In 16th century England, Meggy's defective gait is considered by many to be the mark of the devil. But for her, it has provided the motivation to try harder at everything. After the death of her grandmother, she is shipped off to London to her father, an alchemist. When he rejects her, she needs a lot of good fortune to survive. While she struggles to feed herself, she manages to acquire both friends and skills. While doing so, however, she uncovers a murder plot and must figure out a solution with her meagre resources.

Because medieval history is one of my passions, I was naturally interested in this book. Cushman's other books have been both educational and entertaining (and Catherine, Called Birdy remains one of my all-time favorites). Unfortunately, this story didn't work as well. It's partly due to the lack of a sympthetic character (both father and Meggy were hard to get attached to). The lack of a strong central plot doesn't help matters. But, in the end, it's ye olde awkward foresoothly grammar that sinks this into an unreadable morass. It's a difficult book to read and there simply isn't much pay off in return for the effort.
Posted by Paul at 6:42 PM