Boyfriends With Girlfriends, by Alex Sanchez 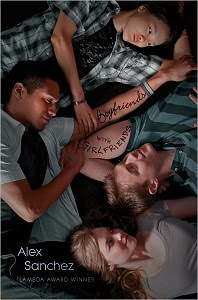 Sergio knows he is bisexual but his best friend Kimiko is a convinced lesbian. Lance doesn't get bisexuals. In his experience they're just copping out from coming out of the closet. He doesn't see how anyone could be half and half. However, his best friend Allie isn't so sure. She's dating a guy, but she finds Kimiko interesting and wonders what it would be like to swing both ways. Together, they are four teens unsure of their sexuality, but tentatively reaching out to each other to try to figure things out together. Much boy meets boy, girl meets girl, and the expected falling out and coming back together ensues.

I have no illusions of being a great writer myself, but this is just plain sloppy work. The characters are realistic and the dialog sounds authentic. I get the sheer literary importance of writing novels that speak to the LGBT community, but I can't really accept that as an excuse for saying much in praise of this book. The writing is dreadful. In the end, I decided that Sanchez (who wins awards!) wrote it in a simple and clunky style to simulate how a teenager might have written the story themselves. But there's no getting around the sloppy construction, the sudden jumps of narrative perspective (quickly switching between the four characters), and the awkward tenses. Read Julie Anne Peters instead!