The Future of Us, by Jay Asher and Carolyn Mackler 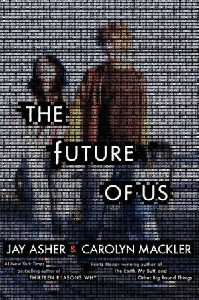 It's 1996 and Emma has just gotten a new computer. Josh (the boy next door) has come over to install an AOL CD-ROM (remember those things? we used them as coasters in my house!). That's a bit awkward because Josh and Emma haven't hung out in six months, not since Josh misread Emma's signals and tried to kiss her. But the really weird part is what happens after Emma installs the program. Her Favorites box has come with a link...to Facebook!

Somehow, she's connecting to her Facebook account fifteen years in the future, seeing what and who she'll become. And, for so many reasons, neither she nor Josh are ready to see that future.

I approached this book with some trepidation. I really like the premise. How would children of the 90s feel about the bare-all instant communications of the 2010s? And, in this area, I wasn't let down. Emma and Josh are astounded by how cluttered the Facebook interface is. And they are mystified at why their grown-up selves are so willing to spill out so much personal information in public. That is good stuff to explore (how quickly our notions of the internet have changed in only fifteen years!), but the authors could have done so much more with it.

The part I was less thrilled with was the team-writing approach. I've recently trashed this trend, so you'll know that I'm not a fan, but in this case, I was actually pleasantly surprised. I really like Mackler's writing (although her recent stuff has dragged). Asher is a good writer too, although I didn't like the story behind his overly-hyped Thirteen Reasons Why. Given such a cool story though, both writers shined. But moreover, they worked together in a way I haven't seen in other "team" projects. Their styles are compatible, they didn't try to bash each other with nasty plot turns, and they focused on a consistent storyline. The end result was a readable and interesting story. All of which proves that when two writers team up and focus on producing a good story, instead of showing off, it can work out.
Posted by Paul at 6:49 PM