Taking Off, by Jenny Moss 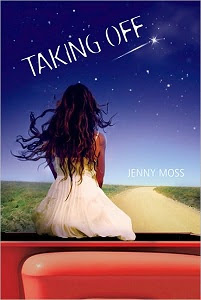 In 1985, senior Annie is stuck. She's been in the same dead end relationship with Mark for the past two years. Everyone at school expects them to get married when they graduate. Her Mom wants her to go to college. But Annie can't figure out what she wants to do. Then, a chance encounter with astronaut and teacher Christa McAuliffe (on the eve of her ill-fated voyage to space) inspires Annie to reach for her own dreams. However, is she ready to deal with the ramifications of her own plans?

It's a strange story to tell in the end. While Christa McAuliffe is certainly an effective catalyst, it is a bit of an emotional sledgehammer and ultimately unnecessary to the story (maybe Sally Ride would have been sufficient?). Nothing is helped by how Moss struggles with expressing Christa's importance and far too much of the book is wasted telling us rather than showing it. Still, Moss does a considerably better job at depicting Annie as an interesting and multifaceted heroine trying to sort out her future. That said, the story moves very slowly and would have benefitted from some trimming down. Losing the astronauts would have been a good start!
Posted by Paul at 6:35 PM