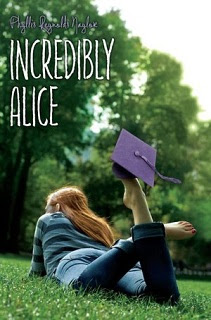 In this 26th installment of the Alice McKinley series, she's finally graduating from High School and turning eighteen. For her last months of school there are a fresh set of challenges: she emerges out of backstage to try acting in the school play, she gets accepted to college (but not the school of her choice), her friend Jill has gotten pregnant and married, and she laments the end of childhood.

As usual, Naylor keeps everything clean and upbeat. There's a few requisite Judy Blume moments with racier topics (genital plastic surgery being the most unusual), but it's mostly good clean fun. Alice continues to be a dream child (dutiful to a fault and wise beyond her years). Anyone who wants to ban these books is seriously out of touch: Alice's adventures hold nothing to the vampires and gladiator games. Rather, she provides a nice safe alternative read for early adolescents.

And while it's understandable that there's value in avoiding major traumas every installment and so there will be a fairly mundane quality to the books, the lack of any climactic moment makes each book now seem like an exercise in treading water (perhaps, this is why they are now bundling three books into one in the new "year" editions)! In my mind, Naylor has sacrificed a wonderful opportunity to give Alice depth by making her such a goody-goody granddaughter. Given the tremendous effort towards building the depth of her character, making her flawed would have been so much more interesting.
Posted by Paul at 10:25 PM