The Beginning of After, by Jennifer Castle 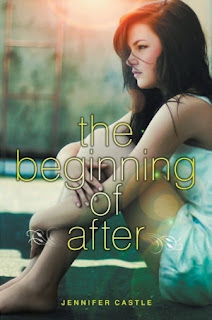 One fateful evening. Laurel has been dragged to a dinner party hosted by the Kaufmans, whose obnoxious son David has managed to slip out to hang with friends. After dinner, Laurel herself begs off from dessert to go home and study for her SATs. When she is home working, there is a knock on the door. A policeman tells her that her parents and brother are all dead. Mrs. Kaufman is dead too (and her husband is in a coma). A car accident has destroyed Laurel's world.

As Laurel quickly finds out, being the survivor means being an object of pity and/or curiousity for all those around her. In this world of after she finds it hard to confide in her friends and she distrusts the motives of the people who reach out to her. Ironically, only David really seems to understand what she is going through, and he's handling it much worse than she is.

The situation itself is of course quite sad, but you pretty much know what to expect with this novel. While the story could potentially pack quite a punch, Castle plays the story straight and low-key. That has its plusses and minuses. There are no amazing revelations about grieving, but also no melodrama. What we get instead is a realistic and authentic story. That doesn't make for much originality, but sometimes a story well-told is enough. At 420 pages, it's a bit long-ish, but it doesn't drag (the length is in fact due to some fine detail).

Castle's strength is in characterization. Both the children and the adults are well-drawn and easy answers are skirted around. The grieving process is well-documented, but avoids the stereotypical "stages of grief" approach that tends to predominate this subgenre (instead, Castle recognizes that not everyone follows the textbook). While Laurel does flirt with some romance, the relationships are complicated as one would expect them to be, given the circumstances. Laurel's feelings about David, in particular, develop in a plausible fashion. Overall, this is a very satisfying read.
Posted by Paul at 10:50 PM