The Girl of Fire and Thorns, by Rae Carson 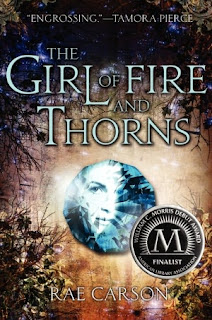 Elisa is a second daughter and thus subject to being married off to the king of a neighboring kingdom. She also lacks the conniving skills of her older sister and is the object of disdain in court for her sweet tooth and her girth. But she is the "chosen one" -- the bearer of the godstone (a jewel that appeared on her stomach when she was christened) and thus prophesied to do great deeds.

And if ever there was a need for great deeds it is now, while a shared enemy is on the march, led by powerful sorcerers who have the power to generate fire out of the air. Elisa is no sooner married off to her new husband than she finds herself embroiled in intrigue and dangerous plans. She must find a way to fulfill her destiny and save her people, and it will call on her to unlock hidden strength and sort out friends and foes.

Here we have all of the lovely trappings of YA fantasy -- familiar adolescent figure (with sibling conflict, self-doubt, and a potential eating disorder) has extraordinary adventures and eventually saves the day through self-discovery. No surprises here! But this book has a lot more and this is where it stands out from the pack. Carson has done an outstanding job at freshening up the setting and the story. Hispanic names, placenames, titles, and an ancient language with a strong resemblance to Spanish shake off the traditional anglo focus of fantasy. A well-developed religion is another unusual element that integrates well with the story. While following a familiar formula, it manages to be original and rewarding.
Posted by Paul at 4:32 PM