Liars and Fools, by Robin Stevenson 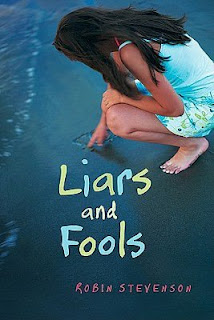 When Fiona's mother was alive, the two of them loved to go sailing, but after her mother's death at sea, Fiona's father forbids her from even going to look at their boat. Worse, he's planning to sell it. But that isn't the only problem. Dad has started to see another woman and wants Fiona to get to know her. Fiona isn't ready for that and wants to do whatever she can to split them up. When she discovers that the woman believes that she can speak with the dead, Fiona sets out to prove that she's a fake. In the process, however, she makes some interesting discoveries about herself and her family.

A modest but surprisingly effective novel about grief and letting go. These novels work best for me when the adults get some time to discuss their feelings as well, and Stevenson does a really nice job of sharing between children and adults. At times, it can get a bit too clinical, but that doesn't interfere with the overall authenticity of people describing their anger and frustrations. There are so many of these books about dead mothers (why do teens like to imagine dead parents so much?) that it's hard to make a book stand out, but this one would be on my short list of good books on the theme.
Posted by Paul at 10:41 PM

Thanks for reading my book, Paul! Glad you enjoyed it- Robin