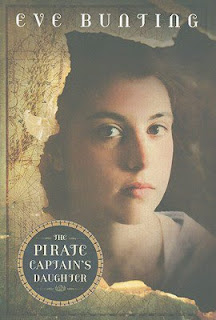 When Catherine's mother dies, she is determined to join her father at sea. Despite his claim to her mother that he is an honorable captain in the royal navy, Catherine has known for some time that he's really a pirate! At the age of fifteen, Catherine longs for an adventure on the high seas and she begs her father to smuggle her aboard as a boy (women and girls are not welcome on ships). He's reluctant to do so, as it will be dangerous for both of them if she is found out. But the biggest danger comes from a different source as it becomes apparent that a member of the crew is plotting to steal from the captain!

It's an odd book that combines some decent historical research (nice naval details) with silly stereotypical pirate-speak. The story itself drifts about like a ship in the doldrums. The pacing is fine, but it seems disorganized (foreshadowing is non-existent, plot details randomly pop up, subplots are dropped, etc.). It feels like a rough draft or maybe a rushed job.
Posted by Paul at 1:08 PM