See What I See, by Gloria Whelan 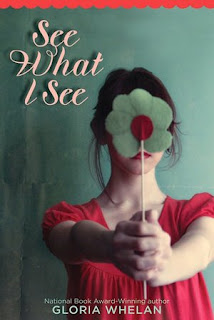 When Kate wins a scholarship at an art school in Detroit, she decides to take advantage of the fact that her father lives there and stay with him. The problem with this idea is that they are not exactly close. In fact, he's pretty much ignored her existence since he walked out on her and her mother, abandoning them to pursue his own artistic career. But, while she isn't expecting him to be thrilled to see her, she is surprised by how hostile he is.

With some effort, she convinces him to let her stay and an uneasy peace forms between them, which is shattered when she discovers that he's dying. Faced with a choice of looking out for her career (as he once did) and taking care of him, she makes a fateful decision to do the latter. In the process, she gains an opportunity to come to terms with what he did to their family.

This spare, but ultimately touching, portrait of a young woman learning to confront her hurt and heal gains its strength mostly from what it doesn't do. The tone is subdued and melodramatic outbursts are kept to a minimum. The characters don't compromise or even come together. One might thus complain that there isn't much evolution in the characters or development in the story, but Whelan likewise avoid unnatural changes and easy solutions. The result is ultimately satisfying.
Posted by Paul at 3:51 PM