Try Not To Breathe, by Jennifer R. Hubbard 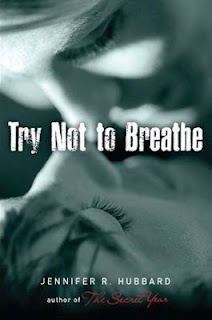 Ever since suicide survivor Ryan has returned from his stay at a mental hospital, he's found that the only place he can find peace is underneath a waterfall. Sure, it's dangerous (some kid died there), but the fear he feels helps drown out his sense of being invisible and a loser. But when a girl starts to show an interest in him and his story (her own father committed suicide and she wonders why he did it), Ryan gets a glimpse of what it is like to actually be someone.

In terms of the story itself, the plot meanders a bit, but the characters are spot-on, from Ryan himself to the curious Nicki to Ryan's highly-strung mother. The supporting characters are also expertly drawn. Hubbard does an amazing job of capturing the sheer awkwardness of the relationships between her characters. The climactic showdown between son and mother hit home and stirred up emotions I really hadn't given any thought to in thirty years. The strength of the characters goes a long way towards making up for the weakness of the plot.

Also, ignore the totally irrelevant cover, which belongs more in a Chris Isaak video than with this book!
Posted by Paul at 9:09 AM